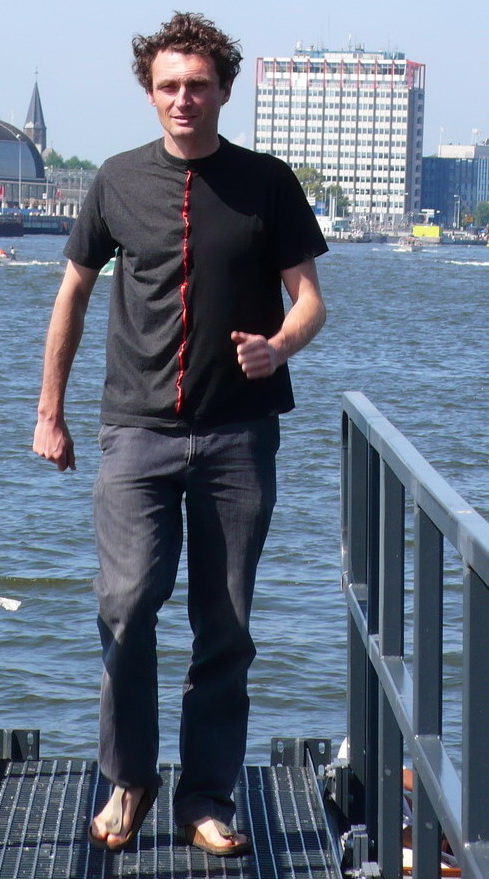 The idea of the TT-shirt was born about in 2007 . I wanted to wear something original to the opening of the Uitmarkt, the yearly event that celebrates the opening of the Dutch cultural season. I had the idea to patch together two half T-shirts, a darky grey and black T-shirt, joining them in the middle with a coloured satin ribbon. As I did so, I realized that this idea resonated with something that I have always experienced, as the son of parents from two different nationalities, a Dutch mother and an Italian father. I have always felt this mixture of cultures written on my appearance and had come up against the advantages and disadvantages of this perspective since my youth. By adulthood, I had come to realize that I was not so much one or the other nationality, but someone with two points of reference, someone for whom the embodiment of their convergence mattered. This is why, although the two half t-shirts I chose to use were very similar, the junction where they met was marked by a vivid colour.

My t-shirt went down well at the Uitmarkt. It was not only complimented on by several friends, but they even ordered some t-shirts for themselves.

At the end of 2014, I started to hear about the TTIP Transatlantic Trade and Investment Partnership, and I was shocked. The democracy of a country is a long evolution through centuries of history. To have corporations with exclusively money interests coming to rule above national constitutions was something that disgusted me. I made a modest donation, I used my social network pages to spread articles about it, but I wanted to do something more. I am a designer, so why not create something to visually express my standpoint? This is how I got back to the idea of TT-shirts.
Not coincidentally TTshirt and TTIP both start with the double T. As Gianni Rodari teaches in his “grammar of fantasy,” letters and sounds can be an easy path for ideas to develop.  My initial idea was to mix together t-shirts of famous brand from different political region (like China, USA, Russia,…).  If corporations wanted to rule under one common brand, above all else, then TTshirt would cut these brands in half and mix them together. It would make TTIP-TTshirts.

Friends were again enthusiastic about the idea.

A day  I found myself arranging my clothes for the change of seasons and came across a forgotten box of old t-shirts. They were not worn out in any way, but I couldn’t imagine wearing them again, as they belonged to another period of my life. Many of them I bought in fly-markets that I visited abroad during my holidays. I was about to bring them to the recycling when the TTshirt idea popped back into my head. Not liking to throw things away, it seemed a good moment to experiment. While mixing the pieces, more thoughts followed. Why not mix t-shirts from all over the world?

Decide which cookies you want to allow. You can change these settings at any time. However, this can result in some functions no longer being available. For information on deleting the cookies, please consult your browser’s help function. Learn more about the cookies we use.

With the slider, you can enable or disable different types of cookies: